the view from my roof before the big snow... 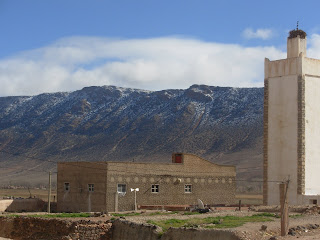 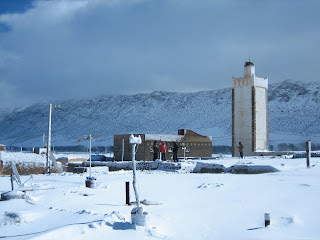 still qmin' and lovin it

I am well. Beyond well in fact. I’ll admit my recent near-nervous breakdown greatly contributes to how refreshed I feel now. Maybe it really just takes a year for me to really settle into a place, to feel close enough to something to not be so afraid of it. I’ve had an odd sense of belonging here since I returned from my last trip to Rabat that I hadn’t felt before. I’m spending, and want to spend, far more time out of my house and in the community, and it just feels so nice. It’s humbling to know how simple it is to be happy, for the most part at least. I overcomplicate and worry over it all so much that I never “do” any of it. I’ve just been hanging out lately, Moroccans absolutely love that and I do too. I’ve also been working, ya, who woulda thought? And that’s empowering as well.

One huge integration point I’ll share is the other day. After hanging at the co-op I went to my counterpart’s house to see what she thought of the final translation, and of course stayed for tea. It had been snowing a bit off and on all day, combined with insanely powerful winds and bouts of sunshine between the darkest clouds. Well after tea the snow became consistent, though not too heavy and it was already dark. Since they would have to walk me home anyway, they decided I should stay for dinner. Dinner of course happens around 10pm, and since I’d arrived around 5, I was there for some time. After a lengthy meal we checked outside and it became obvious that I was not going home that night. I don’t know what exactly constitutes a blizzard, but I’d call it one. Big ol’ balls of snow flying nearly horizontal to the ground. I slept in the big room with all the women and children of the house, as is custom, and we woke in the morning to nearly a foot of snow. It was beautiful, but of course comes with its own set of problems for getting through the day. It was a wonderful evening, and probably one of the warmest I’ll have this winter. If I can ever get on a connection that stinkin works right, I have some great pictures to share. (Also remember how I remarked last year on how they shovel snow off their roofs? Well my landlord was away, and I was busy so never got mine shoveled and have been paying for in the last couples days with roof leaks all over my house, fun fun. I’d add as well that winter decided to arrive way early this year; last year our first and only real snow was in early January, this year it was near the end of November, and it looks like there’s plenty more to come)

I’m also on a real high from reading. Just yesterday my mom’s package of all kinds of awesome books finally arrived, and I broke open the big one last night. I read til midnight, couldn’t sleep, and got up to read some more until around 2:30am. You Can Farm; the entrepreneur’s guide to start an succeed in a farm enterprise. I won’t delve into all that excites me about this book, or I’ll never get to bed, but the essence is simple-You Can Farm. I want to, and the education this and the many other books I’ve just acquired are a step towards making it happen. I’m still shy about revealing all my plans, for their not anywhere near ready yet. But just letting you all know I’m excited, and lhamdullah, I’m smiling again.

I also want to send a little shout out to all those that read this whom I don’t know. I honestly didn’t think anyone read this silly thing but my immediate family, some aunts and a friend or two. But it is true that people from all kinds of places and backgrounds may have thought I had something interesting to say at some point, and I thank you for reading. It’s easy to get wrapped up in our own little worlds, myself and my navel-gazing an obvious example, and I’d love to hear who you are and what you’re up to. This blogging world is a pretty amazing place and opportunities for otherwise never-realized connections are boundless.

A bad habit I’ve acquired and mostly blame my site-mate for is conjugating Tam verbs in English, which explains the title of this here blog post; qmin’. Qm is the verb “to stay” and if I were to say correctly in Tam “I’m staying” it would be dat-qmx, but whatever. Since we’re both Californians my site-mate and I aren’t afraid to use the very important term “chillax” with can be a demand, for someone to shut up, chill out, and relax, or just a way to describe the way we are hanging out. The other poor language habit I’ve acquired is dropping the “g”. Really it’s not necessary and you still know what someone’s saying and since I communicate with other volunteers primarily via textin’ I often drop that last “g” to save time, and more often, money. So that’s what I’m doing, qimin’, in my part English-part Tam world.

After my quick little trip to Rabat and the wonkyness of saying goodbye to the COSing staj I made the trip home. I say wonky because it was a little awkward and quite sad. It doesn’t help to go see a bunch of happy people complete their service and be off to America or adventures elsewhere when I’ve been feeling so shitty. But to get out of my own damn butt for a minute I am very happy for them, tbarkala to all! It truly is an incredible accomplishment to complete 27 months of living, working and totally being in this country, or any I suppose. I am now the equivalent of a junior in Peace Corps. Six months from now a group of Health and Environment volunteers will COS, and six months later, inshallah, myself and the rest of my staj of Small Business Development and Youth Development volunteers will also COS. It’s pretty crazy to think about, and being the odd sheep in the flock the other day, listening to their views at the end and whatnot I left feeling more encouraged to fulfill my service. My way home did not go as well as I’d hoped; I managed to humiliate myself beyond compare on the train, didn’t make it to Fes in time to make the next three taxi trips before dark and had to pay way over the PC limit at a lame hotel, paid way too much for a cyber and slept completely alone for the first time in months, and it was sad.

I came home to feed the very hungry cats, cuddle a bit, and be off again, hopefully my last trip out of site for a long time, to Thanksgiving at one of my dear friend’s sites! I barely made it through a crazy snow storm, and ill-equipped attire wise. Kathy just laughed as I entered, wet and grumpy. But we are quite the happy homemakers and smiled through the hours and hours we spent preparing. Others came later and helped a ton too. Some highlights; a real turkey a couple people had had slaughtered the day before, enough mashed potatoes and even more “gravy” to feed a small country, the most amazing dinner rolls ever, and corn bread stuffing (I actually learned for the first time ever that day that most people actually call it “dressing”, what?!), and an amazing walnut honey pie. Remember that all of this is made from absolute scratch; no frozen pie crusts, bread in a bag, etc. My job was the pumpkin pie and kugel, and I must say I rocked it. The kugel was quite a mush pot-carrot, pumpkin, zucchini, potato, leek, onion, I think that’s it, and it was even better than my last. With no cans of Libbey’s or evaporated milk, I didn’t know if my pumpkin pie would be edible. Kathy, the dear lady, made the crust and I spent a couple hours grating tons of pumpkin, puréeing it, cooking it on the stove and evaporating the excess water. I used whole milk instead of evaporated, and it actually turned out glorious! So it is in fact possible to make pumpkin pie from scratch. Everyone loved everything and I did my best to enjoy it all and ignore the deep pang of not being in the park in LA with my family. It was nice, but I miss you all dearly and if all goes well I will be with you in that park next year!

I returned to the bitter cold that will be life as I know it in my site for many long months. I didn’t realize until late Friday night that Thanksgiving day was actually my one year anniversary in my site, crazy. Feeling too cold to get started cleaning my neglected house, too fidgety to read, not ready to sit alone with myself after so many days spent with Americans, and realizing I hadn’t eaten all day I did the one thing that always takes my mind off my mind: cooking. I made an incredible soup with leeks, onion, zucchini, carrots and chickpeas. I also made my very first challah! It was super good and tonight I’m doing it all again. Something funny I have to note is the palette of my soup, as in color. It’s all secondary colors! I just used the veggies I had- onion (purple), carrot (orange) and zucchini (green) and then the natural white of the leek and chickpeas, and natural brown of lentils. Yay, art and food. Then I’ll blend it all up in the blender for the best flavor and get a purdy and yummy brown. I also hung yet another set of strings from my bamboo ceiling so I can hang the bowl of dough directly above the stove so it will rise well from the heat of whatever else I’m cooking.

I plan on spending a long while in site now. I get to go to suq tomorrow for the first time in I think three weeks! I went to the cooperative today and they were all glad to see me and I assured them I wasn’t going away again for awhile. They joked that it was too cold here and Rabat may be better but I said oho! (no!) I love it here and am tired of traveling so I’m happy to be qmin’. I finally have the Arabic and French translations for the new brochure so I’ll get it typed up right and it should be ready before Eid, inshallah! And just today there was more serious talk about fixing the big looms. I’m also thinking about taking a trip soon… I need something to look forward. It’s odd, even though I’m further away from home than ever, I’ve never stayed in such a small area for so long before. I’ll let you all know what my trip plans are soon…

Posted by Briana at 7:07 AM No comments:

Briana
Louisville, Kentucky, United States
Living and loving life in Kentucky. My most wonderful husband and I welcomed our first child last spring and continue to settle, nestle and grow in our first proper home. I write these naval gazey mind saunterings for family, friends, fellow RPCVs and farmers interested in another random life on this here planet earth.